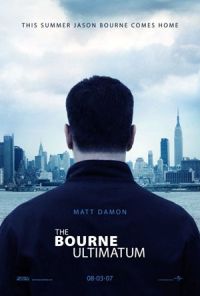 Even though we were on the second row and one seat from the left of the auditorium this was still a fantastic movie. As always it has a superb, gritty, frantic feel about it. There’s always one stand out hand-to-hand fight in every Bourne film and this one is no exception. The fight choreography is exceptional, I think I forgot to breathe for the entire duration. I agree with Michael Heilemann’s comments though that it seems all CIA hitman have to be male models with man-bags.

The final scene nicely echoes back to the opening scene of the first film with Bourne once again floating in the water. Plus, for once it was a blockbuster that wasn’t blatantly fishing for a sequel at the end of the film.