archive for the Reviews category

Jason Statham (The Transporter) is the bus from Speed. He is double-crossed by his gangster boss and injected with a synthetic Chinese drug. If his heart rate slows below a certain rate he dies. Great! As this means the film doesn’t damn stop for the next hour and a bit. Chuck in some hilarious David Fincher style camera zooms and on screen explanation, a pumping sound track and you can’t go wrong.

Just watched Running Scared and I have to say, I was pretty impressed! It’s another of these gritty movies that deals with the low-level mob dudes that do all the real dirty work. Joey Gazelle (Paul Walker, the guy from 2 fast 2 furious) is the mob guy who “disposes” of guns when some shit has gone down. Except he doesn’t dispose of them, he stashes them in his basement… Pretty dumb huh? As you’d expect, this leads to shenanigans and the film follows the next 18 hours of his life as he tries to put everything right. It’s style is very similar to NARC, Training Day and Four Brothers. It is pretty violent and has a particulary twisted moment in the middle which is very un-settling. Has an ace gun fight at the end and even has the bad guy from Hell Boy in it! Oh yeah and there’s a twist…

Last night Kerry and I went to see Jim Henson’s Puppet Improv at the Fringe. It was great! Now, this wasn’t the muppets, as that is a specific off-shoot of the Jim Henson company, this was just a bunch of the Jim Henson trained performers with more of the ‘generic’ puppets. Animals, aliens, cartoony humans and such. The stage was set up in such a way that the performers just did their stuff out in the middle of the stage with the puppets above them. There were various large screens in the auditorium which showed the feed from a fixed camera set looking at the stage, but at the level of the puppets. So you could watch the screens and see the kind of view you get on Sesame Street or watch the stage and see how the performers make the puppets do what they do.

With it being an improv show there was a lot of audience partipiation which centered around filthy suggestions and topic which usually got a response of “did that yesterday” and “had that already” from the compére. My favourite sketch was when the audience had to suggest four letter words. Then the assembled puppets had to get from word A to word B by just changing one later at a time in a normal conversation. Needless to say, they got stuck pretty quickly as we chose ridiculously hard words, but that just added to the comedy as the pupppets started sniping at each other. In the end they did manage it but had to resort to a few spanish words and comedy words like “mooo” and “owww”. An excellent show, worth the money, definitely recommended.

Saw this with Kerry and Jed yesterday afternoon after a cracking ‘Hangover Cure’ breakfast at Double Dutch. This being the second in the trilogy it was always going to be the film stuck in the middle. This is slightly noticeable in the film as the sheer amount of quests and sub-quests they’ve managed to cram in to speed the story along is a bit too much. But, put all of that aside and it’s still an awesomely fun movie. Johnny is still up to his usual tricks and gets his character fleshed out a bit more, Orlando is watchable but as dull as a plank and Keira does her usual hot and feisty pirate wench stuff. Jack Davenport makes a good return as a washed up, bitter (ex) Commodore Norrington. Bill Nighy and the CGI team are excellent as Davy Jones, his tentacles and the rest of his crew were some of the best CGI I’ve seen. Likewise for the Kraken, Jones’ pet sea monster that pulls ships down to the Big Black. I would have liked more naval type engagements and less running around with comedy “natives” and sharp sticks, but hey, this isn’t Master & Commander. Throw in a creepy voodoo fortune teller (straight out of Monkey Island), all the English extras from the first film, an evil scheming East India Company and you’re on to a winner. By the time it got near the end I’d forgotten it was a cliff hanger and so was surprised when it suddenly ended! I think that’s a good sign. 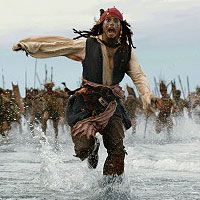 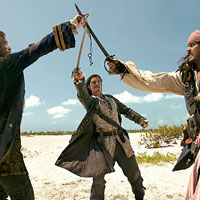 Wow, Revolver is a total head-f**k (to put it mildly). It’s a surprisingly cerebral movie for Guy Ritchie and I’ll be honest and say that I Googled for an explanation of the plot as soon as I finished watching. Revolver is absolutely nothing like Lock Stock or Snatch other than it has Jason Statham in it and it’s vaguely about gangsters. Ritchie has definitely matured with this movie and I had to shift my brain out of comedy gangster movie mode and up a notch to take this in. I can’t really describe much of the plot without giving it away but there is lots of voice-over and innner monologue from Jason Statham. André Benjamin (from Outcast) is also very well cast in it and Vegas, as always, makes a gorgeous backdrop. I’d recommend giving it a watch, its central theme about the “ultimate con” is intriguing.

A History Of Violence

Viggo Mortensen is excellent in this David Cronenberg directed movie. I watched this knowing nothing about the plot and so was pleasantly surprised at the twists and turns it throws at you. The plot is simple but nicely presented and keeps you guessing right until the end. In typical Cronenberg style the move is very raw, and the violence is sudden and explicit, much like The Sopranos. The ending is Hollywood but not too much of a cop-out and leaves you upbeat but still reeling.

A History Of Violence